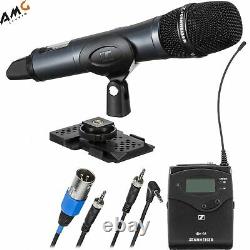 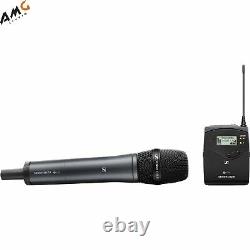 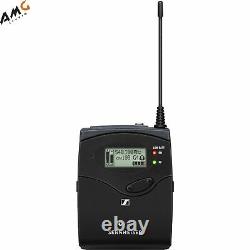 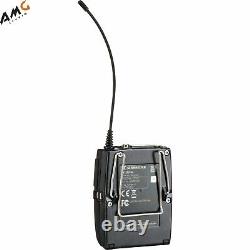 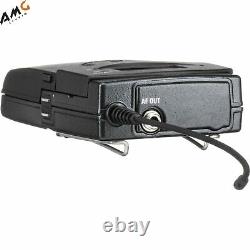 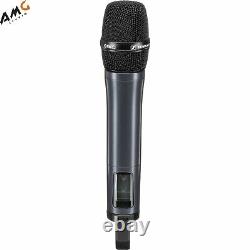 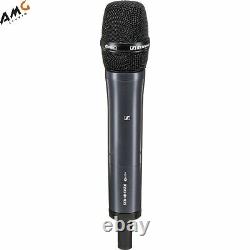 Sennheiser EW 135P G4 Camera-Mount Wireless Cardioid Handheld Microphone System. What's in the box? Please check with us for availability of frequency needed before ordering. The Sennheiser EW 135P G4 camera-mount wireless handheld microphone system features the proven combination of reliability, flexible control, and broadcast-quality sound that has made the EW Series an industry standard for videographers, journalists, and content creators all over the world. The EW 135P G4 gives you the tools to adapt and meet the wireless challenges that inevitably arise on set. The frequency scan function automatically searches for the cleanest frequency at your location, while the transmitter offers an interchangeable capsule design, allowing you to swap mic capsules with different polar patterns to suit your application. The system includes a camera-mount receiver and an updated, lightweight handheld transmitter equipped with an MMD 835 cardioid capsuleideal in situations where you don't have time to position a lavalier mic or you need to quickly pass the mic between several people. The receiver connects to a camcorder or a DSLR/mirrorless camera to capture crisp-sounding speech or dialog for projects ranging from wedding and corporate videos to red-carpet and man-on-the-street interviews in noisy environments. The EW 135P G4 is backward-compatible with previous evolution systems, giving you the ability to mix and match G4/G3/G2/G1 receivers or bodypack, handheld, and plug-on transmitters.

It is also compatible with EW 500 systems. Built for Dependable Performance in the Field.

The EW 135P G4 features all-metal construction and a lightweight handheld transmitter, well suited for extended use on location. Using the included shoemount adapter, the compact receiver easily mounts on your camera without adding much weight. The included cables allow you to connect the receiver to the 3.5mm or XLR audio input of any DSLR/mirrorless, camcorder, or recording device. Both transmitter and receiver feature daylight-readable LED displays showing reception quality, battery status, and audio level. To get you going quickly, they synchronize via infrared interface with the simple push of a button. The EW 135P G4 ships with an MMD 835 dynamic mic capsule, which delivers a natural sound optimized for speech intelligibility. Its directional cardioid polar pattern helps to reject unwanted background sound, making it ideal in loud environments such as trade-show floors, busy public areas, or sporting events. To take full advantage of the microphone's dynamic range, the system employs proprietary HDX compander technology, preserving your sound without adding unwanted noise during transmission, and delivering audio with remarkable accuracy and quality.

Adaptive-diversity reception for reliable transmission up to 330. 46 MHz bandwidth with 1680 tunable UHF frequencies for clean reception.

20 frequency banks, each with up to 12 factory-preset channels to prevent intermodulation. Pilot tone squelch for eliminating RF noise when transmitter is turned off.

Powered via AA batteries or rechargeable BA 2015 Accupack batteries (available separately). Side contacts for recharging the receiver's Accupack without removing itrequires the L 2015 quick-charging unit (available separately). Operate up to 12 wireless mics at once on set. Unlike digital wireless systems, the SKM 100 G4 transmitter can transmit to an unlimited number of EW Series receivers.

Wide range of accessories adapts the system to a variety of applications. EW 100 G4 vs EW 500 G4 Systems at a Glance.

This item can be shipped worldwide.